The city of Tijuana is right in the middle of a major Renaissance. Over the past few years, trendy restaurants, cafes, food trucks, and craft breweries have begun popping up all over the city. What was once a dangerous border town is quickly becoming a foodie destination. The craft beer scene, in particular, is booming. Tecate is no longer the only brewer in Baja. This hasn’t happened overnight. It’s actually been decades in the making. This guide outlines the best craft breweries in Tijuana 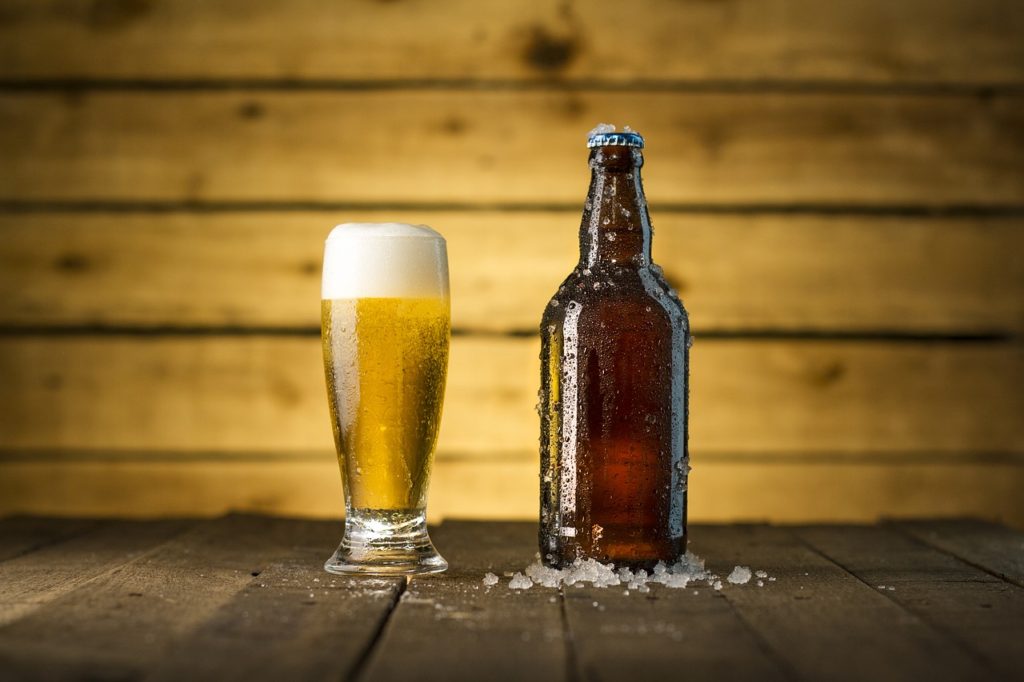 The Beginning of Craft Beer in Tijuana

Starting in the 90s, Tijuana’s neighbor to the north, San Diego began developing its legendary craft beer scene. Over the years, it has become one of the best craft beer cities in the US. In fact, San Diego has been called “The Craft Beer Capital of America.” Tijuana brewers took inspiration from the best and developed a craft beer scene of their own to rival.

Tijuana craft beer isn’t just a copy or knockoff of San Diego’s beer. Many Tijuana brewmasters spent time studying and perfecting their trade in the US, Germany, Belgium, and other world-class beer regions. They took inspiration, added a bit of Mexican style, and made something unique of their own. Tijuana craft beer is the real deal. These days, Tijuana and San Diego brewers are even making collaboration brews and trading trends and ideas.

Microbreweries in Tijuana operate on a lower budget and smaller scale than their north of the border counterparts. While there are some larger, more established operations, most are grassroots. Some of these guys are brewing up 10-gallon batches with homemade equipment and serving it up in two table tasting rooms. Similar to the early days of craft beer in the US. In this article, I outline some of the city’s best craft breweries as well as list three of the best places to go in the city to sample craft beer.

Probably Tijuana’s most famous craft brewery, Cervecería Insurgente has won multiple international beer competitions. Their beer is also distributed in the US. Insurgente was started in Tijuana in 2010. The creator, Ivan Morales, gained his knowledge about craft beer in San Diego. Some of their most popular beers include: 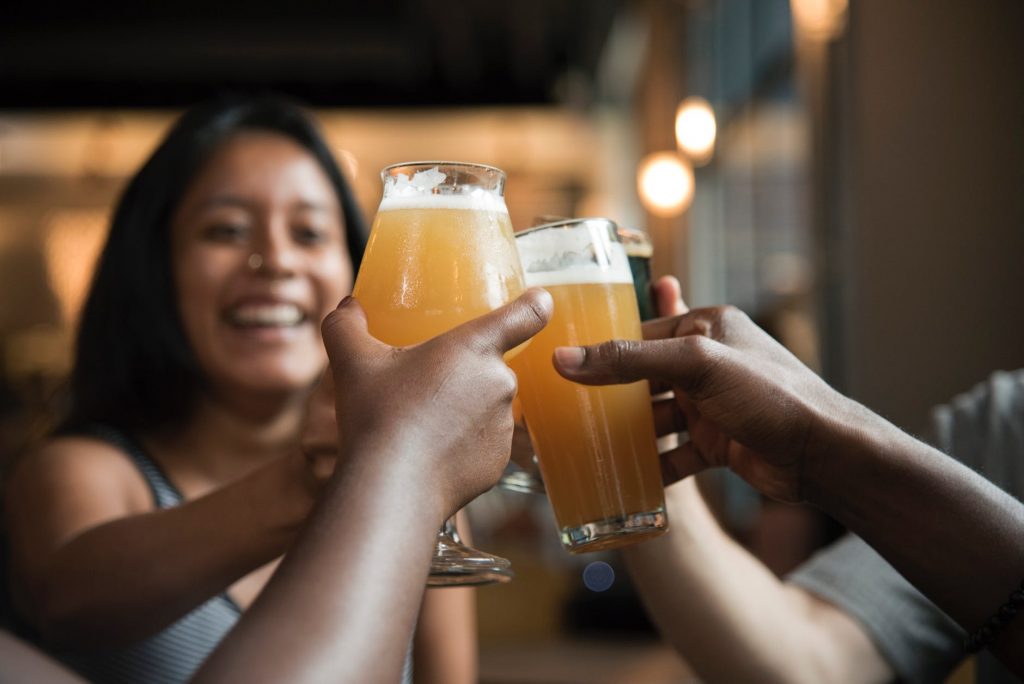 Norte is one of the highest rated breweries in Tijuana. Their tasting room has been voted best in Baja California multiple years in a row. Here, the focus is beer. They don’t do much marketing. Come here to enjoy a panoramic view of downtown TJ and even better beer. They are famous for their dark porter. I recommend the sampler because all of their beers are excellent.

Location: This place is hard to find. It’s located on the 5th floor of a parking garage on 4th street between Avenida Revolucion and Avenida Constitucion. Díaz Mirón y o Cuarta 8160, Zona Centro. 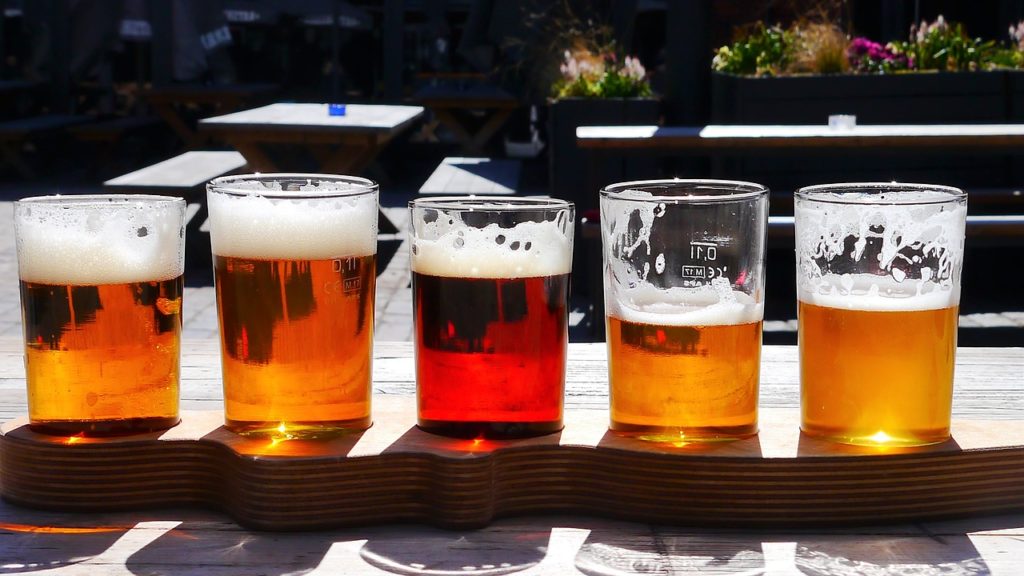 While most of Tijuana’s tasting rooms are small and gritty, BCB is a bit more upscale and sophisticated. They offer 300 Mexican and International beers including 42 on tap, making this one of the best places in the city to sample beer. They also serve up some of the best gourmet burgers in the city. These go great with a strong IPA. BCB is also a great place to watch your favorite sporting events.

Opened in 2012, Cerveza Funes is a bottle shop and tasting room all in one. They carry an excellent range of local beers and wines alongside their own brews. If you’re feeling inspired after your beer tasting tour in Tijuana, Funes also sells supplies and accessories for brewing your own beer. They are located just a block away from Telefonica Gastro Park, a popular food truck park in Zona Rio where you can enjoy some of the best foods that the city has to offer as well as more beer.

These guys opened up shop in 2000 and have slowly become one of the most widely distributed brewers in the city. Their tasting room recently underwent a massive renovation. They also serve food. A couple of their most popular brews are: 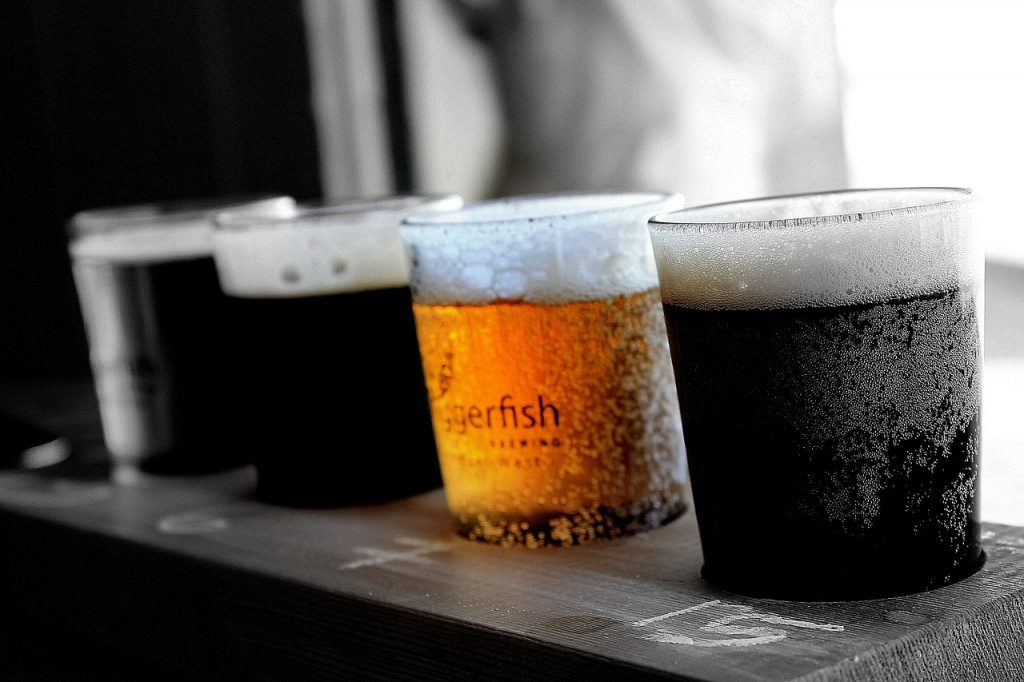 Known as the most affordable craft brewery in Tijuana, Mamut serves up an excellent range of artisanal beers for just a couple bucks a piece. They also make a pretty damn good pizza. They decorated the taproom with interesting murals and a sculpture of the wooly mammoth. Mamut means mammoth in Spanish. While you’re there, take a walk down the recently revived walking street Pasaje Rodriguez. On this quirky little street, you’ll find a mix of cafes, niche shops, and street art.

Another excellent Tijuana Brewery. Azteca is an intimate little tasting room downtown with friendly staff and an interesting variety of beer. They offer a couple of fruity beers as well as a killer West Coast style IPA.

Where to go in Tijuana to Sample Craft Beer

The nice thing about Tijuana is the fact that most tasting rooms are grouped together in two neighborhoods of the city. If you don’t mind walking a little bit, you can stay in one part of town and hop from brewery to brewery. In fact, you can even walk between these two districts though safety is a concern at night. The two best neighborhoods to sample craft beer in Tijuana are: 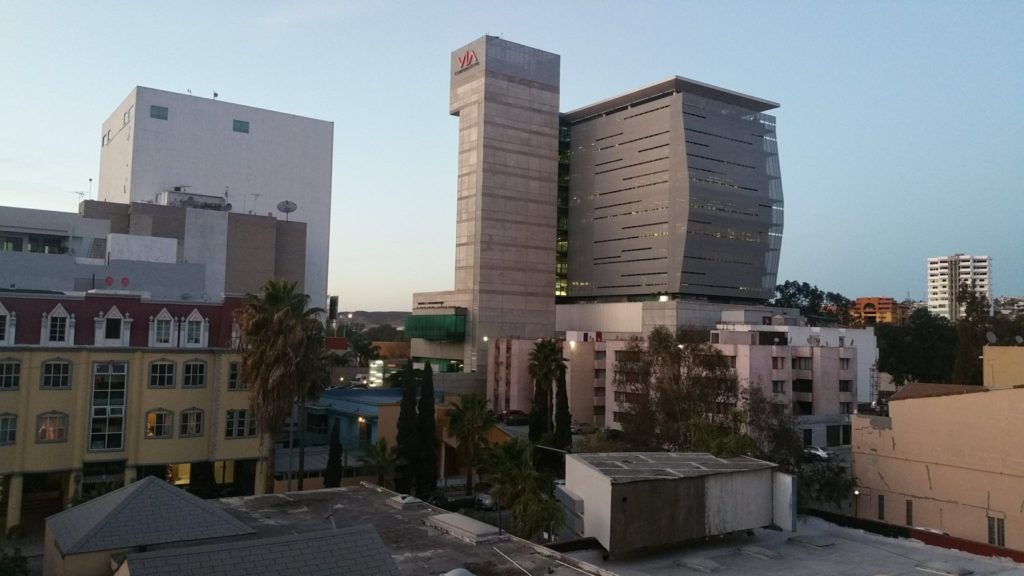 This is Tijuana’s business district. Zona Rio is a bit more upscale and trendy. It’s also less touristy. The main street going through this neighborhood is called Paseo de los Heroes. Here you find a number of breweries as well as two of my favorite places in Tijuana:

This crazy place is a multi-level open-air mall where every business is a bar, club, or brewery. It was recently renovated and reopened just a couple of years ago. Here, you find dozens of tiny tap rooms serving up small-batch craft brews from all over Baja California. You can sample most all of Tijuana’s best craft beers without even leaving the plaza. Some of the bars brew up batches as small as just a few gallons using equipment that they pieced together themselves. Plaza Fiesta is my favorite place to go out in Tijuana. It’s convenient, safe, and has something for everyone to enjoy.

Tijuana is famous for its ‘colectovos’ which are outdoor food courts, mostly made up of taco stands and food trucks. Telefonica Gastro Park is the best and most famous colectivo in the city. Here, you find some of Tijuana’s most modern and innovative food as well as a craft brewery on site. They also serve up some of the most popular craft beers from around the city. In the center of the court, they have family style seating on picnic benches. On many weekends there is a live music event. This is a great place to go with friends to try some modern Mexican food and enjoy a few craft beers. If you’re in Zona Rio, I highly recommend you check this place out.

Most all of Tijuana’s craft breweries have tasting room location downtown all within walking distance from one another. The main street of downtown Tijuana is called Avenida Revolucion. Border Psycho, Mamut, Cerveza Norte, and Azteca are all located just a few blocks of each other. They are bunched together between Calle Benito Juarez and Calle Hermenegildo Galeana just off Avenida Revolucion. 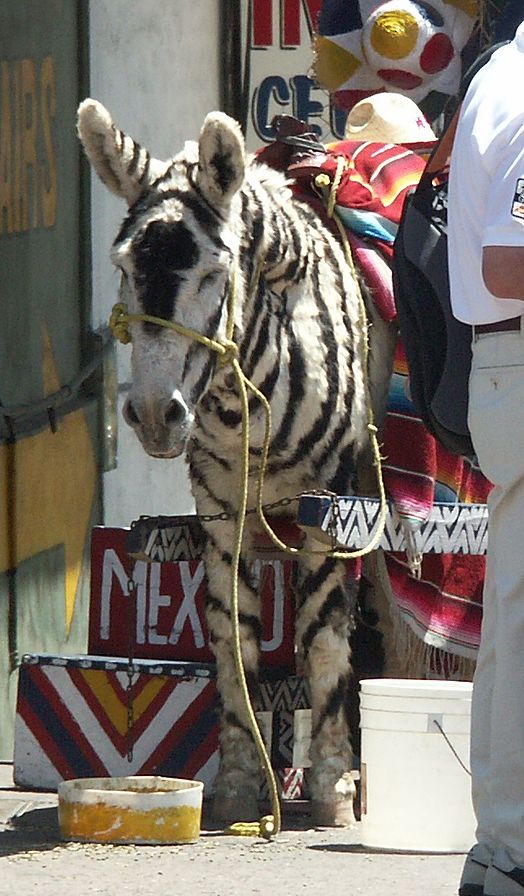 Intersecting with Avenida Revolucion is Pasaje Rodriguez. This is a small walking street full of cafes, bars, artisanal shops, as well as a few craft breweries. While you’re exploring downtown, be sure to take a stroll through this unique street.

Other Mexican Beer: The Macrobrews

Nobody likes a beer snob. While you’re south of the border don’t forget to try out some of the country’s macrobrews. Even Mexico’s larger beer companies brew up a quality product. There’s just something refreshing about a nice, cold pale lager. It’s not the most sophisticated but it’s really pleasant to drink. Some macrobrews to try in Tijuana include: 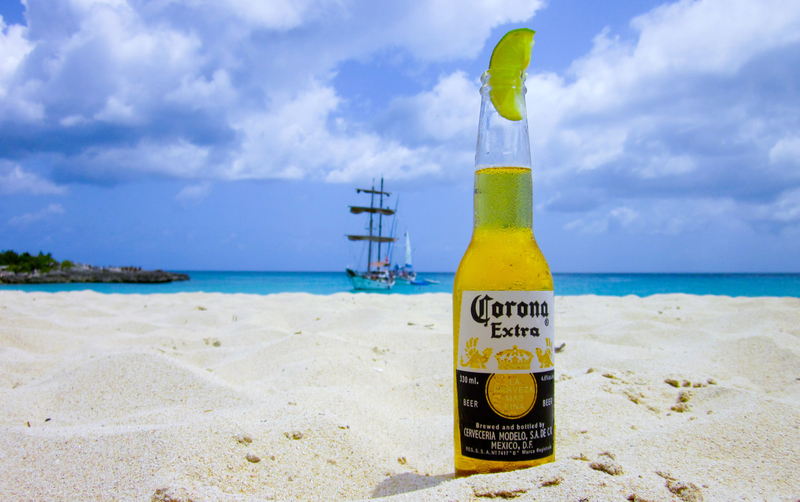 Corona with lime on the beach

Tijuana is a hidden gem that needs to be rediscovered. Over the past few years, the city has completely redesigned itself. Trendy bars and restaurants are everywhere. What was once a dangerous border town is quickly becoming a Mexican cultural destination. Unfortunately, the city still has a poor reputation. Security concerns in the early 2000s scared many tourists away.

I have spent the past year living in Tijuana. In that time, I have sampled almost all of the city’s best craft beers. The quality that Tijuana’s brewers create always impresses me.

To help you plan your trip, check out my Ultimate Guide to Visiting Tijuana. It covers everything you need to know for a smooth trip across the border including transportation, accommodation, safety, things to do, and more.

Have you visited any of Tijuana’s craft breweries lately? Share your favorite beers and taprooms in the comments below! I’m always looking for something new to try.

More Tijuana Guides from Where The Road Forks

Excellent article. Telefonica Gastro Park has been my go to spot for the past few months. The food is just too good to venture out of there but I will be trying your other recommendations soon. Cheers!

Thanks, yeah Telefonica Gastro Park is pretty great. It's so convenient having all of those options in one place. There are so many great places to eat and drink in TJ these days it's tough to choose.