When it comes to bicycle brakes, you have two styles to choose from. This guide outlines the pros and cons of disc brakes vs rim brakes to help you decide which to go with for your next bike. I’ll also outline the different types of disc and rim brakes available. 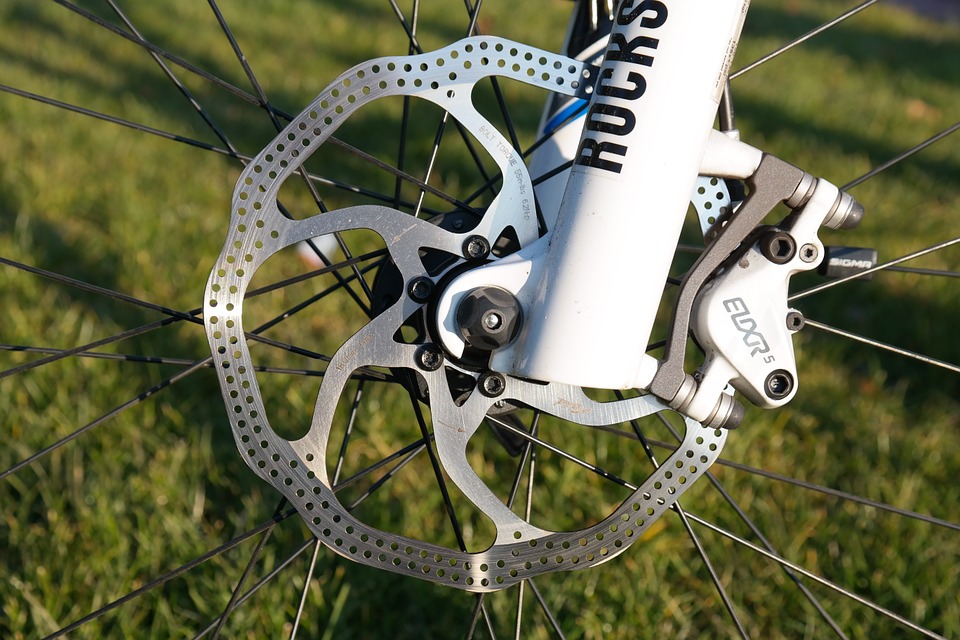 What’s the Difference Between Disc Brakes and Rim Brakes?

Rim brakes stop the bike with brake calipers that apply braking force directly to the flat sides of the bike’s rims. The front caliper mounts to the bikes’ fork and the rear caliper mounts to the seat stays. The calipers have arms that reach down to the rim sides. Brake pads mount on the ends of the caliper arms. When you apply the brakes, the brake pads squeeze against the rim. This creates friction which slows the bike down. Rim brakes are activated with a cable that runs from the brake levers to the calipers.

Disc brakes stop the bike with calipers that apply braking force to rotors (the discs). The rotors mount to the bike’s hubs and spin with the wheels. The calipers mount on the fork and seat or chainstays, near the axles. Brake pads are mounted in the calipers, on either side of the rotor. When you squeeze the brake levers, brake pads push against the rotors to create friction which slows the bike down. These are the same type of brakes that you would find on a motorcycle. 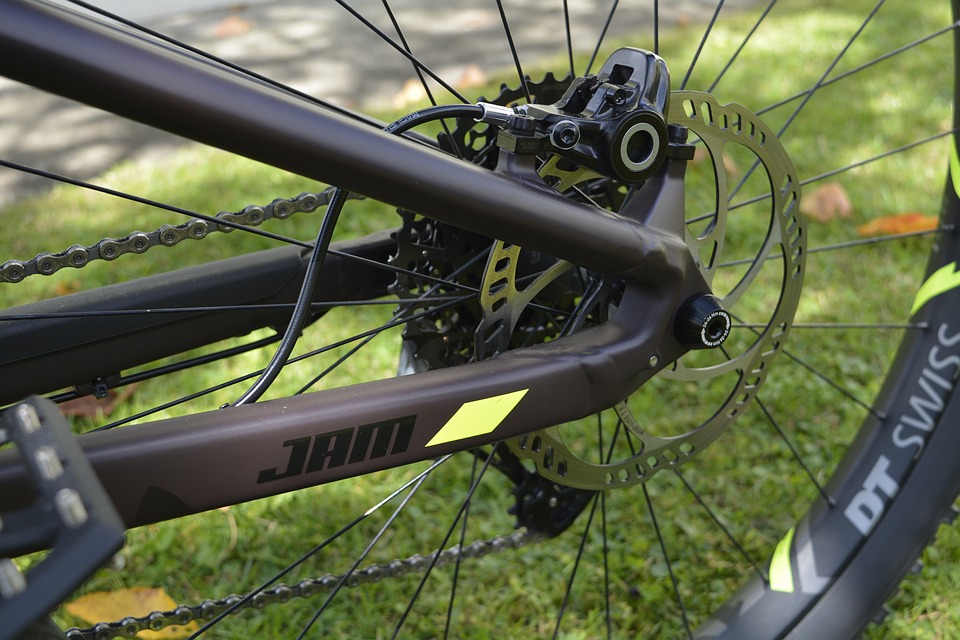 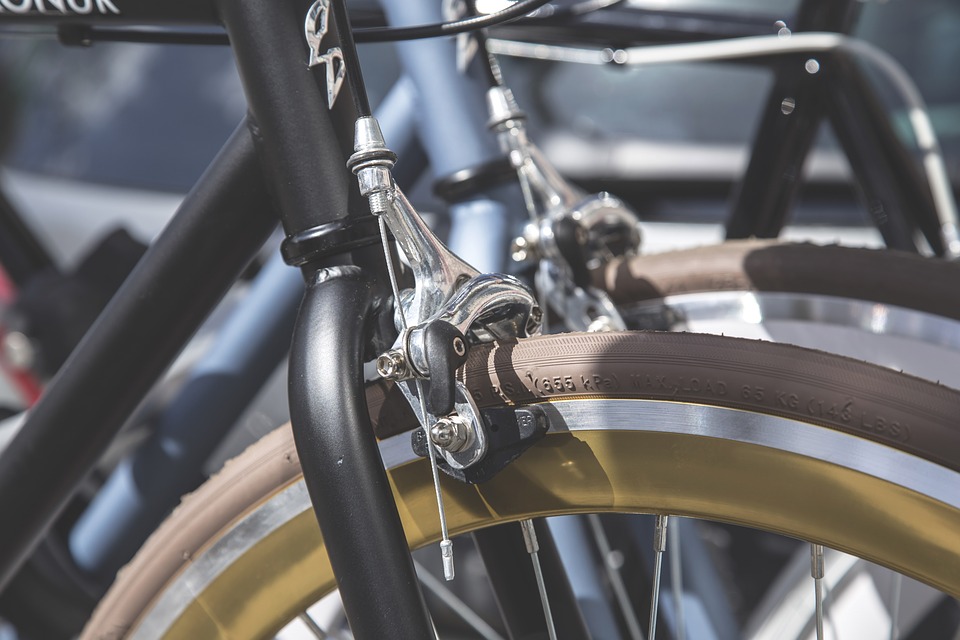 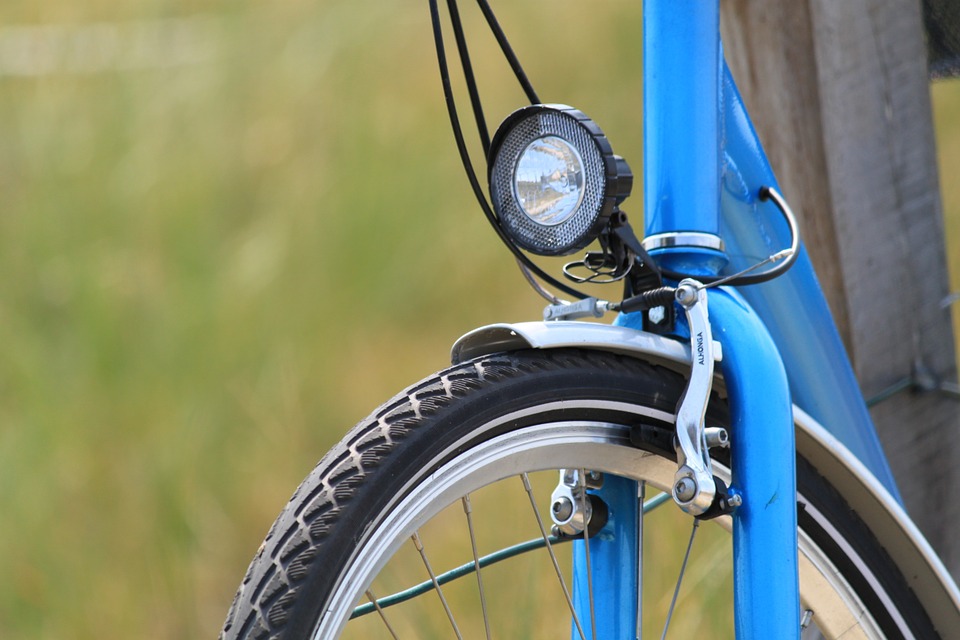 More Cycling Pros and Cons Analyses from Where the Road Forks 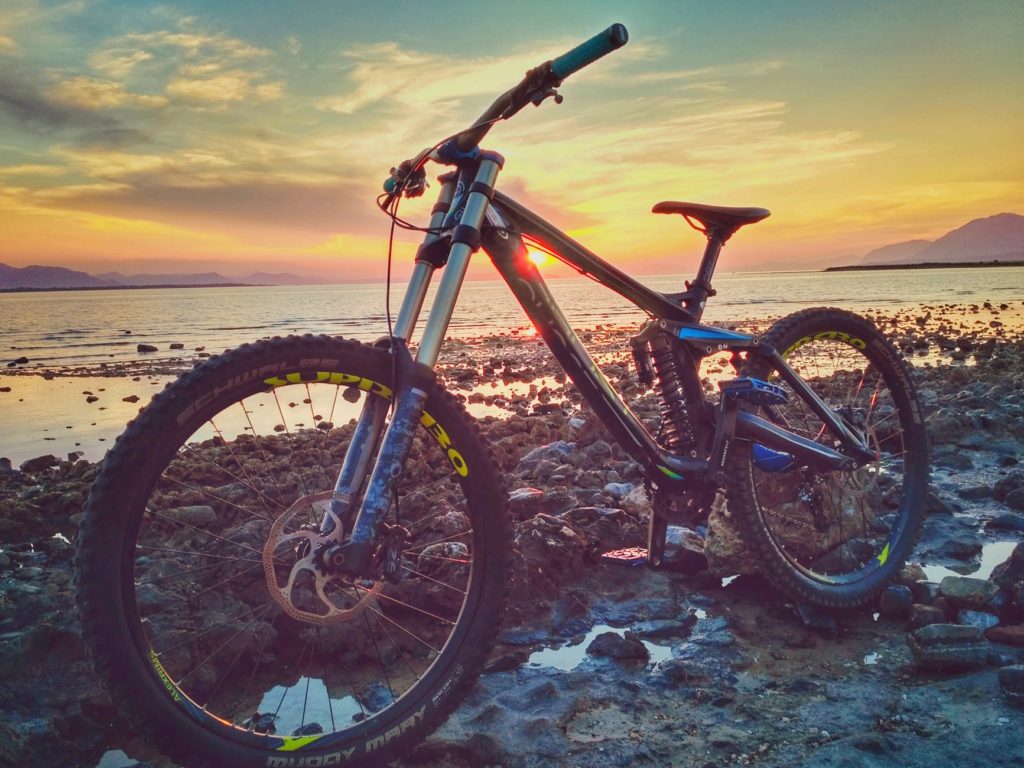 Mechanical disc brakes operate with a braided steel cable, just like rim brakes. The system works exactly the same. When you pull the brake lever, the cable pulls a lever on the caliper. This lever squeezes the pads against the rotor to create friction to stop the bike. Mechanical disc brakes use the same pads and rotors as hydraulic disc brakes.

The benefits of mechanical disc brakes are affordability and simplicity. They are also compatible with the same brake levers and integrated shifters as rim brakes.

Hydraulic disc brakes operate with a fluid-filled line. When you squeeze the brake lever, the line pressurizes. This pressure moves a piston in the caliper. The piston pushes the pads against the rotor. This is the same technology used in car and motorcycle disc brakes.

The main benefit of hydraulic disc brakes is performance. They offer strong and consistent stopping power due to the reduced friction in the system. The brakes are also more precise. Another benefit to hydraulic disc brakes is that they require less maintenance once they are set up. They are a closed system that is less likely to be affected by dirt, sand, and other debris. The system is also lighter.

The main drawbacks are the cost, maintenance, and complexity. The system is simply more expensive. The levers, calipers, and brake lines all cost more. Maintenance is also a problem. Even though it’s less frequent, you have to bleed the brake lines periodically because braking performance degrades over time as air bubbles make their way into the fluid in the lines. This job is a bit tricky. 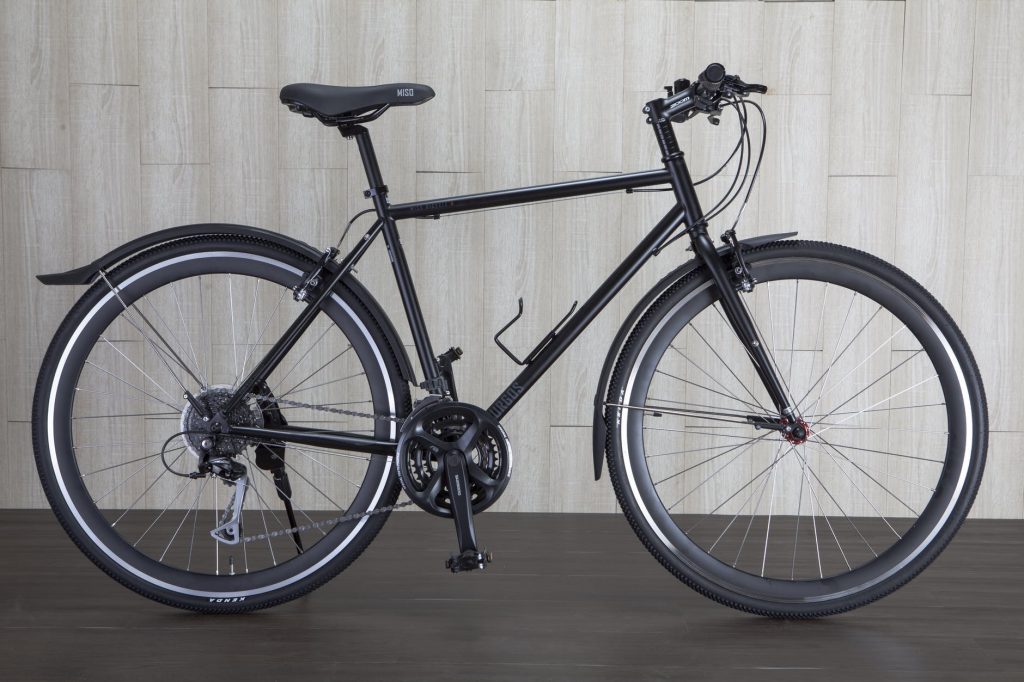 Rim brakes come in a number of designs. They all work more or less the same way. The main differences are where the caliper mounts whether it is comprised of one piece or two. A few common types of rim brakes include.

A Note About Tire Effect on Braking

Your tires play a major role in your bike’s stopping distance. A solid set of disc or rim brakes will be able to lock up your tires if applied hard enough. Low quality or worn-out tires easily lose traction.

When your tires lock up, your brakes aren’t doing anything to stop you. In order to have optimal brake performance, make sure you use quality tires and replace them when the tread wears out. 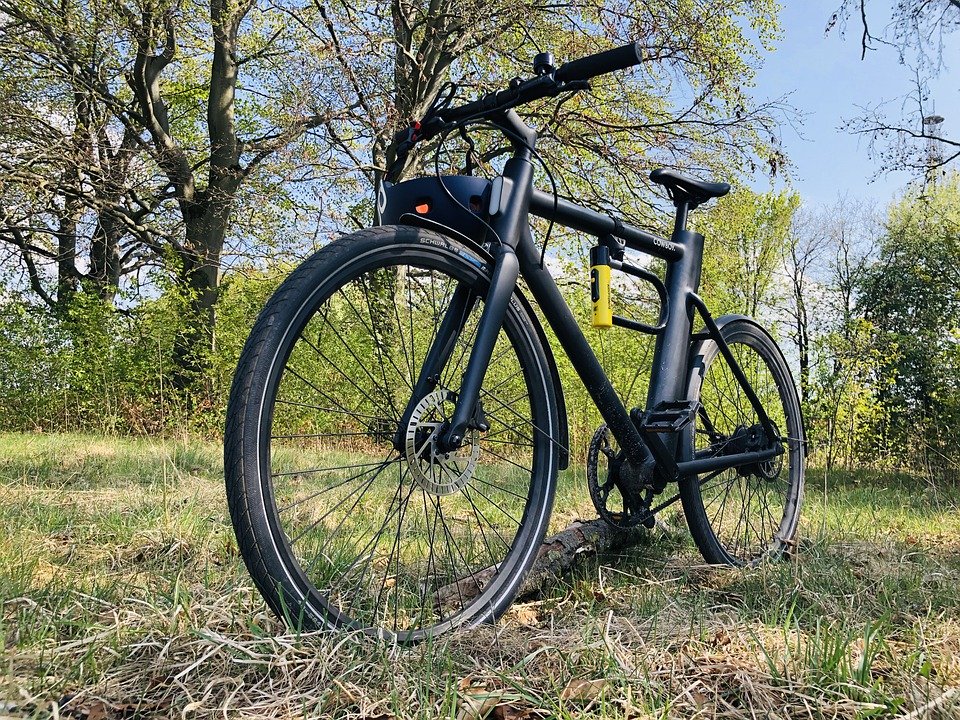 What Kind of Cyclist Should Choose Disc Brakes?

Disc brakes are ideal for those who plan to ride in poor weather conditions like rain and snow. They also work great in dirty conditions where your rims might get covered with dust, sand, mud, and other debris. Disc brakes provide consistent performance, even when the road or trail gets sloppy. You don’t risk scratching up your rims if they get caked in filth.

Those who ride on mountainous terrain will also be better off with disc brakes. You don’t have to worry about overheating your rim and having a blowout during a long descent. Braking performance doesn’t fade, particularly if you use hydraulic disc brakes.

Riders with a higher budget should also go with disc brakes. If you can afford it, you might as well get the best performance you can get. You’ll feel safer and more confident if you can always stop reliably and consistently.

What Type of Rider Should Choose Rim Brakes?

Rim brakes are ideal for those who only ride recreationally in fair weather. If you just ride on flat bike paths, rim brakes provide more than enough stopping power.

Bicycle tourists and bikepackers who ride in remote regions and developing countries may also find rim brakes preferable due to parts availability. When you’re in the middle of nowhere, it’s easier to find rim brake parts because the technology has been around forever. Used parts are common.

Those on a lower budget should also stick with rim brakes. Components and replacement parts like pads and cables are cheaper. 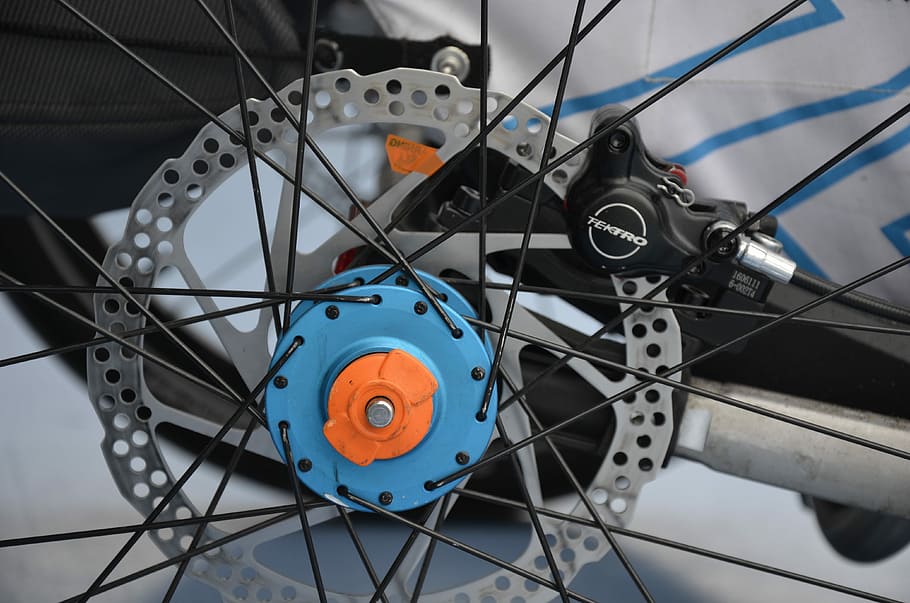 For most casual riders, rim brakes perform just fine. They’re cheap, reliable, and easy to maintain. Some types of riding require more stopping power or better braking performance. For example, for fully loaded bicycle tourists, the upgrade to disc brakes may be worthwhile. The additional stopping power, less frequent maintenance, and the ability to descent long hills without stopping may come in handy.

In the end, disc brakes vs rim brakes are a bit of a personal preference. Performance-wise, they are similar enough that it’s probably not worth the money to buy a new bike just to get disc brakes. If you’re already in the market for a new bike, discs are worth the additional cost in most cases. The added weight and complexity make up for themselves with the added safety of more powerful braking performance.

Do you prefer disc brakes or rim brakes? Share your thoughts in the comments below!

Good point. I hadn't thought of that

Disagree with a couple points. Disk brakes don't necessarily stop you faster than rim brakes. Depends on the force applied so if you have a good grip, both a very much equal. Also, not all the stress is applied to the top of the fork with rim brakes. The fork acts like a lever with either type and the end of the lever absorbs force no matter which type of brake you use.

Sir I want to Indian roadster bicycle to modernize like put the disc brake, gear system, handlebar and some mounting points how can I do it sir please give me a suggestion

WOW, there is a lot of false information on this site in regards to rim vs disk brakes.

First off is the stopping power myth brought on by marketing forces, what dictates how fast a bike, or even a car, can stop is the adhesion of the tire to the road and nothing more, whether you have disk brakes or rim brakes it all boils down to the same thing, tire adhesion to the road, so a better tire will stop faster than a crappy tire, but the reverse cannot be said for rim brakes vs disk brakes if the tires are the same on both. So one type of braking system is not safer than another, unless you add heavy rain and poor wet weather performing rim brake pads.

This means that same is true for mechanical disk brakes vs hydraulic disk brakes because again it comes down to tire adhesion to the road.

In regards to mech vs hydro disk brakes, you do have to pull the brake lever just a bit harder than you do with hydro, but if you're too weak to pull that lever which doesn't take hardly any effort than your too weak to be riding a bike in the first place! I'm 70 years old and I can activate my mechanical disk brakes on my loaded touring bike without any trouble with my old age strength.

On rainy days a lot of people scream about how good disk brakes are compared to rim brakes when the bike gets wet, but I have both types of brakes on my bikes, and I use nothing but KoolStop Salmon pads on my rim brakes because those will grip wet aluminum rims fast and can stop as fast as wet disk brakes.

Rim brakes make rims wear out fast...fast? how fast is fast? My rim brake bikes have averaged between 40,000 to 50,000 miles on a set of rims (I've been riding for over 50 years so I have a track record to look back on), KoolStop Salmon rim brake pads last about 20,000 miles, the pads are cheap at around $7 for the pair. Disk brakes on the other hand the rotors will last on average about 5,000 miles if you use organic pads and if not the rotors will last about 1,500 miles and those can cost between $8 for the cheap ones to $90 for the really nice ones, so say the average is $40 for each; the disk brake pads only last on average 800 miles for organic pads and these will cost about $15 to replace. So if I use the lower end of 40,000 miles for rims then you would have to pay $640 in disk pads over the course of 40,000 miles, but you also have to pay another $320 for the rotors to be replaced over 40,000 miles, so now you're total is $960 and aluminum rims cost less than that for a pair. And a lot of disk brake owners are complaining of getting only 150 to 300 miles on pads, so the whole argument that you made about rim brake pads costing more and not lasting as long is a complete fabrication!

And the heat build up on rims being more than disk is completely false!! It is an established FACT that due to the size of the rotors vs the size of rims that rotors get hotter faster than rims and takes longer to cool down then rims do.

I'm not really familiar with Indian roadster bicycles. What you can modernize depends on the mounting points and specifications of your frame and fork. Some parts may not be compatible. To switch to disc brakes, there will need to be a mounting point for brake calipers on the frame and fork. You'll also need new hubs that are disc brake compatible. For the gear system, your frame will need a derailleur hanger to mount a rear derailleur. Handlebars are easier. You should be able to swap them out for a different style without too much trouble. Just make sure your new handlebars have the correct diameter so your brake levers and stem are compatible. If you want to modernize everything, it may be cheaper and easier to get a different bike with the brake and gear systems that you want. Hope this helps.