Home » Africa » How to Travel by Train from Victoria Falls to Bulawayo or Harare, Zimbabwe

This guide explains, step-by-step, how to travel from Victoria Falls to Bulawayo or Harare by train. This overnight ride is comfortable and easy to make. I highly recommend it if you have the opportunity. If you are traveling between Victoria Falls and Harare, you will have to stop in Bulawayo to change trains. There is no direct connection. 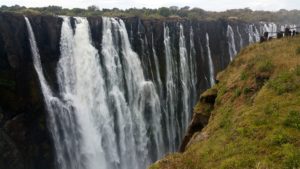 Why Travel by Train in Zimbabwe?

I love trains and ride them every chance I get. There a number of reasons why this trip, in particular, is special.

How to Buy Zimbabwe Train Tickets

To buy tickets for this route, you’ll have to make your way to the station ticket office in Victoria Falls, Bulawayo, or Harare depending on the direction you are traveling.

You can find the exact location of the station by clicking or imputing the following plus codes into Google Maps. Because standard addresses aren’t used in Zimbabwe, this is the easiest way to find the locations.

Tickets are not available online and must be purchased on the day of travel. I tried to buy tickets a day in advance but was told to come back the following day. Evidently, they don’t have the system computerized.

Don’t worry about tickets being sold out. The train was pretty empty when I made this trip. My friend and I had a compartment to ourselves. There didn’t seem to be very many passengers on the whole train. Even when walking back to the bar car, we saw very few people. 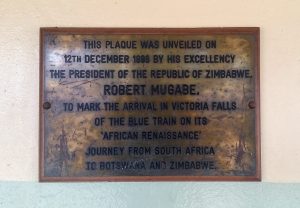 Getting to and From the Train Stations

In Victoria Falls and Bulawayo, it is possible to simply walk between your accommodation and the train stations because the cities are fairly small and walkable. Bulawayo is a bit bigger so you may wish to take a taxi if you have a lot of luggage. Harare is a big city so depending on where you are staying, you’ll need to take a taxi or minibus from your hotel to the train station.

There are three classes available for this route:

I have heard that bedding is available for a small extra charge but it was not offered to me. Maybe ask about it if you’re interested. If you are a solo traveler, I recommend 2nd class. 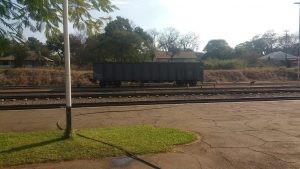 Baboons on the tracks

How Much do Zimbabwe Train Tickets Cost?

The cost of tickets going either direction is the same.

Tickets between Victoria Falls and Bulawayo:

Tickets between Bulawayo and Harare

A Note about Money in Zimbabwe

When you travel to Zimbabwe, be sure to bring enough cash for the duration of your trip. Surprisingly, cash is extremely difficult to come by. Pretty much all of the ATMs are empty. If you do find an ATM with some cash, you’ll only be allowed to withdraw a small amount of money. Credit cards are commonly accepted. Luckily, my friend had an extra $100 and my credit card company doesn’t charge a foreign transaction fee so we were able to just get by.

When buying train tickets, be sure to bring enough cash. They have a credit card machine but often times, it doesn’t work or the internet is down and the transaction can’t be processed.

Between Victoria Falls and Bulawayo

This route operates every day

Between Bulawayo and Harare

This route operates 3 times per week.

Note: These trains often run late and can be a bit unpredictable. For example, the train I was on from Victoria Falls to Bulawayo left right on time but ended up stopping for around 2 hours in the middle of the night because of a mechanical problem. We arrived around 3-4 hours behind schedule. 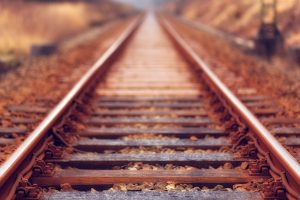 Traveling between Victoria Falls and Harare by Train

If you are traveling from Victoria Falls to Harare, the trip will take a day and a half.

Because the train between Bulawayo and Harare only operates three times per week, you will have to time it so that your train to Harare is running the day that you arrive in Bulawayo.

Food and Drink on the Train

Because this is an overnight train leaving around 7 pm and arriving early in the morning, it is not necessary to pack any meals. You can just have an early dinner before boarding and eat breakfast when you arrive the following day. You may want to stop at a supermarket before boarding the train and buy some snacks and drinks. The options at the bar car are limited. They just sell beer and some chips and cookies if I remember correctly.

Before I caught the train, I just stopped in the supermarket and stocked up on some snacks for the ride. I bought some bread, tuna, bananas, and cookies in case I got hungry in the night. I also bought a few beers to drink on the train.

Stops Along the Way

The train makes just a couple of short stops to pick up and drop off passengers along the way. There is no time to stop for dinner after you board the train. Don’t get off or you’ll risk being left behind.

The ride was comfortable. There were no security checkpoints or random inspections. After the tickets were checked, no one disturbed us for the remainder of the ride. My friend and I had bought some beers to keep us occupied while we rode across Zimbabwe. When we ran out, we bought more beers from the bar car in the back of the train. Snacks were also available.

Maybe it was coincidental, but everyone in our train car was foreign. I have a feeling that they try to lump all of the tourists into one car. We booked second class and were the only two people in our 6 person compartment. In the compartments next door, we met an older South African/ Canadian couple. On the other side of us was a young German couple. We shared a few beers together and chatted before going to bed.

Tip: Before you hit the sack, be sure to look out the window to enjoy the starry sky. There is very little light pollution in rural Zimbabwe. If you are lucky and the sky is clear, you should be able to see the milky way and southern cross from the train. One of my favorite things about traveling in Africa was seeing all of the stars. Light pollution is bad back home. I had never seen the milky way before traveling to Africa.

Sleeping on the train was a bit rough. It’s a loud and bumpy ride at some points. We arrived about 3 hours later than scheduled the following morning.

Final Thoughts on Traveling Between Victoria Falls, Bulawayo and Harare by Train

Riding a train in Africa is a worthwhile experience. Rail infrastructure is limited on the continent and many lines only run intermittently due to frequent mechanical problems.

Some other popular African train routes include:

Have you taken any African train trips? Share your recommendations in the comments!