I’ll start off by saying, traveling between Dar es Salaam, Tanzania and Lilongwe, Malawi by bus is a long trip. In fact, it’s 1527 kilometers or 941 miles. This trip can be done in 2 full days of travel. It is best to plan for 3-4 days just in case you experience delays as we did.

I have heard that there is a direct bus from Dar es Salaam to the border or maybe even into Malawi, but it wasn’t running when we made the trip. You may want to ask around first to make the trip a bit easier. The method outlined in this guide will get you there and you can leave any day of the week. 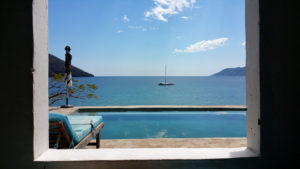 Buying your Bus Ticket from Dar es Salaam to Mbeya

The day before you travel, you’ll want to go to the Ubungo bus terminal in Dar es Salaam to buy your ticket. The bus station is a way out of town so you’ll need to take a taxi or an Uber there and back.

Once you are at the station, go into one of the offices and ask for a ticket to Mbeya, Tanzania. Several companies sell tickets to Mbeya so you may want to shop around a bit. I don’t remember the exact cost of the ticket but I think it was around $15. Unfortunately, taxi fare to and from the bus station will cost more than the ticket.

The bus leaves early in the morning from the Ubungo bus terminal and arrives in Mbeya after dark. We arrived at around 11:00 pm. You will have to stay the night in Mbeya as the bus station is closed when you arrive.

Staying the Night in Mbeya, Tanzania

There is a hotel within walking distance of where the bus lets you off. I can’t remember the name but I don’t recommend the place anyway. The room looked like nobody had stayed in it since the 1800s. It was filled with heavy wooden Victorian style furniture and a thick layer of dust. Everyone gave off a creepy kind of vibe here which is unusual for Africa. Anyway, it was a place to crash for the night. It cost about $20 for two people.

Bus From Mbeya, Tanzania to the Malawi Border

Wake up early the next morning and head back to the bus station where you were dropped off the previous day. From here, you want to catch a minibus to the border. Just ask around the station and someone will point you in the right direction.

The Tanzania exit process was smooth. I waited in a short line and an immigration official stamped me out with no questions.

Malawi recently started charging everyone for visas, unfortunately. The visa is available on the border for $75. For more info about visas, you can read my African visa guide. The visa process was easy enough. I probably waited around 15 minutes for the Malawi officials to process and stamp the visa.

Bus From the Border to Karonga, Malawi

Once you are in Malawi, you’ll need to catch another minibus to Karonga. This is a small town located about an hour south of the border. You can also take a taxi if you don’t want to wait around for a minibus.

I would recommend staying the night if you have time. Karonga is a pleasant little town full of friendly people. Nice to chill out in for a day. There are several basic hotels in town where you can stay for just a few dollars per night.

Bus From Karonga to Lilongwe, Malawi

If you are in a hurry, you can go straight to the bus station in Karonga and buy a ticket to Lilongwe. There is a nightly bus. The bus is supposed to leave at around 18:00 but our bus didn’t leave until around 21:00. The journey is about 12 hours and costs around $12. If everything goes to plan, you’ll reach Lilongwe sometime the following morning. 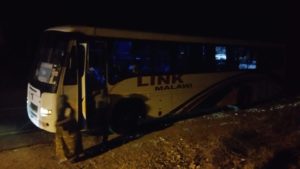 Bus from Karonga to Lilongwe

Detained at a Military Checkpoint in Mzuzu, Malawi

The bus goes through several military checkpoints along the way where everyone has to exit and present their passports. Unfortunately, at around 2:00 am our bus was stopped and detained at a military checkpoint. Evidently, they suspected that there was some contraband on the bus and they needed to search it before it would be allowed to leave. Someone may have been attempting to transport goods from Tanzania to Malawi without paying taxes. We were told that the bus would leave at 10:00 am the following morning.

Luckily, we were stopped in a large town called Mzuzu. Rather than spending the next 8 hours sitting on uncomfortable plastic seats on a cold bus, we decided to find a hotel for the night. One of the passengers helped us find a taxi and recommended a hotel. It ended up being a decent budget hostel. 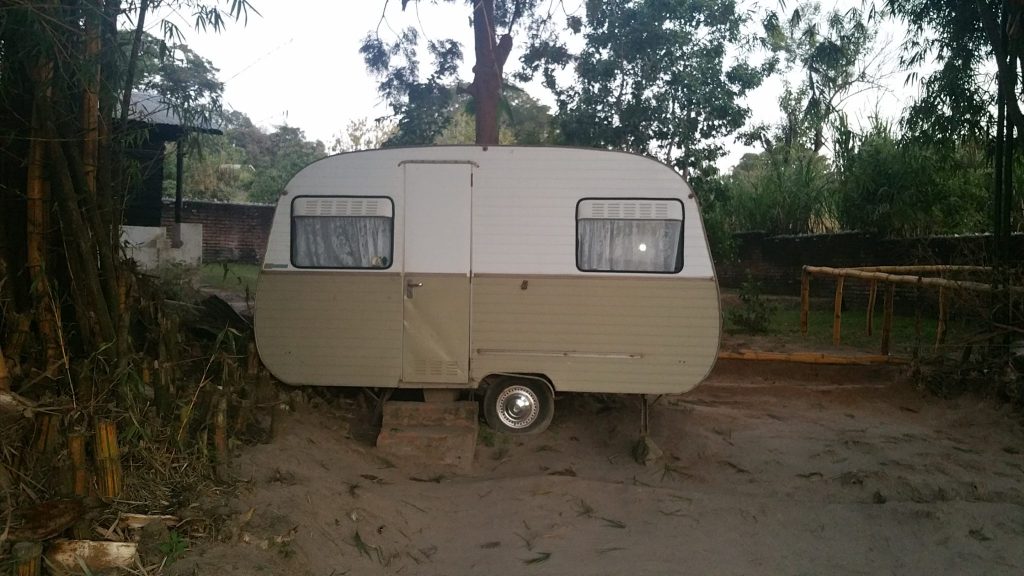 Strange accommodation for the night in a hostel in Mzuzu. An old camper. Inside was fairly nice and comfortable

Because we were already in town the following day, we decided to spend the day exploring Mzuzu. We slept in and missed our bus the following morning.

That afternoon, we began searching for another bus to Lilongwe. We had to buy new tickets, of course, because we missed the original bus. After shopping around, we decided to go with a company called AXA. Supposedly, they have the newest and most comfortable bus operating this route. The ticket cost around $10.

The bus from Mzuzu to Lilongwe left in the evening and took around 7 hours. We arrived in Lilongwe in the middle of the night and took a taxi to our hotel. Several companies operate this route. You may save some time or money by catching a minibus at the bus station.

All in, the journey from Dar es Salaam to Lilongwe took 4 days. It could be done in 2 theoretically but it is best to plan for 3 days just to be safe. We would have made it in 3 if our bus had not been detained in Mzuzu.

Overall, the journey is safe and fairly easy to make. It is, however, long and uncomfortable. All of the transfers you must make along the way get annoying. I think we took 6 different buses in total.

Have you traveled from Dar es Salaam, Tanzania to Lilongwe, Malawi by bus recently? share your experience in the comments below!

More Africa Guides from Where The Road Forks

Your voyage to African continent is quite remarkable, I really enjoyed every single line. Hi guy, write a book on your African expedition. Thank you Humphrey Alams