The Centurion Ironman Dave Scott was a mid to high-level road bike designed for use in triathlons. They were manufactured in Japan between 1985 and 1989. Quite a few of these bikes were made so they are pretty easy to find on Craigslist and eBay. A Centurion Ironman in good condition can be had for around $300.

Centurion produces several different versions of the Ironman Dave Scott over the years. The original was made from 1985 to 1986. In 1987 the line split into two models called the Master and Expert. with the Expert being the higher range model. These were made from 1987 to 1989. An Expert Women’s version was produced in 1987. 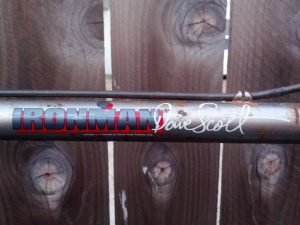 Based on the components and color scheme, I believe I had a 1985 model. It included:

Even though mine had seen better days, it still rode fast and smooth. The highlights of this bike are the frame and wheels. The tange 1 steel frame is well made and of high quality. The bike has a comfortable but sporty geometry. For their day, the wheels were pretty high grade. They are light and sturdy. 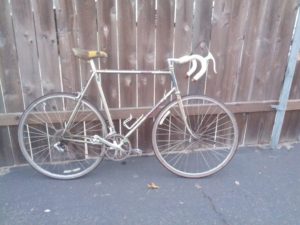 At the time, I wasn’t really into cycling and did pretty much zero maintenance other than adjusting the brakes when I got it. The bike took a beating and never left me stranded. I rode this thing pretty rough, occasionally going over curbs and hitting potholes. I never broke a spoke.

Who This Bike is Good For

This is a great bike for someone who is just getting into road cycling. It also makes a good commuter or around town bike. Rather than spending thousands of dollars on a new road bike, you can pick up one of these used and get started for a few hundred bucks. Because this bike was a higher end model for its day, it still holds up compared to low to medium level modern equipment. If you are on a tight budget, this is a much better choice than a department store bike.

I had only owned mountain bikes before I bought the Centurion Ironman. The only downside of this bike for me is the down tube shifters. They take a bit of getting used to but are low maintenance and shift smooth.

Another thing that may bother some people is the color scheme depending on the year and model you get. These bikes were made in the 80s and have a very 80s look. Many feature bright pink, purple, yellow, or green paint jobs. I prefer less flashy colors but that is a personal preference. Lucky for me, mine was dark gray with quite a bit of rust. 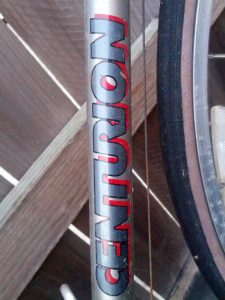 The Centurion Ironman Dave Scott was my first road bike. I bought the rusty old bike on Craigslist for about $150. For two years I commuted to school and around town on it while I was living in Santa Barbara. At the time, I thought of it as just an old beater bike to ride around town. As I learned more about the model, I really grew to appreciate it.

Do you ride a Centurion Ironman Dave Scott? Share your experience in the comments below!

Hello, I own a Centurion Ironman Dave Scott. Mine is mostly red. I acquire the Centurion by exchanging it with a Kuwahara BMX (blue). Up to this day I still ride the Centurion. I also own a Kestrel, Trek USPS & a Bianchi ( for commuting).

I had one, bought it new and put many miles on it here in Orlando in the late eighties. That's back before the paved bike trails, I rode right out in traffic with the cars. You can't do that today or you will get run over. There is too much traffic here and drivers are on their phones!!! Now I stick to the back streets on my 29er mountain bike. I do remember telling people I never rode on Mondays or Fridays. People hate Mondays (work related), Fridays have lots of drunk drivers. Enjoy your ride where ever you may be.

I have the Ironman exspert all 105 with dura ace rear hub and cassette. Selle italia anonomical Swede saddle, Vittoria tires , shimano spd peas also, tires with the Kevlar heavy duty tubes and a Kevlar rim band so no flats. Nitto bars and stem. I’m 52 and it’s the 1987 pink and yellow Miami Vice colors I remember when I was 17 -18 when this was new and when this bike passed by it turned heads everybody wanted one. And I did. This is my second same color. It’s so underrated and undervalued but in my opinion will be a collectors item I’m sure. It’s very resilient tough bike the old 105 group last forever these bikes are keepers they ride smooth and great for any kind of riding or vintage racing. I’ll never sell it. I’m gonna ride tomorrow. Still looking to upgrade to all campagnolo or all period 105 new old stock if I can find it. Get one and save it you’ll be glad you did while there still cheap and people don’t know about them but those that do are gonna hold on to theirs. Pass it down to your kid one day.

I rode an expert model for the 1989 Ironman in Kona. My biggest concern was the race people would haul it off to the trash when it sat next to the race bikes the high end competitors and pros were riding. It got me home in 15 hours but it was a beast rather than a racing pony.

I come from a bmx and mtb background and have never had a road bike. I signed up for a triathlon and picked up a 1988 expert Ironman for $100 from a friend and seasoned triathlete. I love the vintage look and the day after buying it tested it with a 51 mile(birthday) ride. I am very pleased. The hood cover set was a bit melted and gooey but I swiftly replaced the levers after the second ride and considered replacing the 6 gear with a 7 gear with integrated shifters but Am still undecided on that. Everything seems solid and I was impressed with how light the steel frame was. Looking forward to building some memories on what seems like a pretty solid $100 investment.

Sounds like you got a great deal on that bike for $100.