Home » Mexico » Tijuana » Inside a Tijuana Bar During an Armed Robbery

While walking home one evening after enjoying a couple of drinks, I noticed a bar that was advertising beers for only two bucks. I decided to stop in for one more drink before calling it a night. Inside, the place was depressing. It was run down and pretty empty. Maybe 5 customers sat scattered throughout a dark, claustrophobic pit of a room. I considered just leaving after seeing the state of the bar but decided to stay for one cheap beer. After taking a seat on a stool at the bar, the bartender approached me and said in English,

Evidently this isn’t just your normal bar, I thought.

Just as he popped the cap off the beer bottle and placed it on the bar in front of me, two guys entered the bar. I just happened to glance over as they were walking in. They stood out because they were dressed like they were a couple of bandidos in a cowboy movie. They wore jeans, cowboy boots, sombreros, and brightly colored ponchos. Red bandanas covered their faces. I also noticed that one of them was holding a revolver. 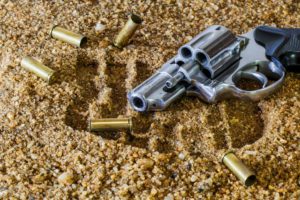 Immediately, a waiter noticed and rushed over to the men. The man with the gun pointed it at the waiter at chest level while they talked quietly for a moment. Even though they were standing only about 8 feet from me, I couldn’t hear the conversation over the loud music playing in the bar. After a brief conversation, the waiter calmly walked over to the bar to get something. The staff was clearly trying to act as though nothing was wrong but everyone in the bar knew what was going on. A woman sitting at a table across from the bar began to cry.

The waiter returned to the men discreetly handed something to the man with the gun. Satisfied, the man fired off two shots at random into the bar without looking and both men ran out the front door. The bullets had flown in my general direction but luckily missed me. I heard the shots ricochet off the brick wall in the back of the bar. Everyone looked around. No one was hit. The loud crack of the gun firing instantly sobered me up.

After the men left, I finished my beer and laughed the situation off with the bartender. Apparently, they are robbed every couple of months so this is routine for them. The guys wanted drugs and money. Police presence is extremely heavy in this part of the city so the risk is very high for these robbers. Even with police on every corner, sometimes they catch the bad guys and sometimes they get away. I returned a couple weeks later and learned that these bandidos got away.

Wow I would've been very shaken up. I'm curious what made you react by laughing it off with the bartender instead?

I'd had a few too many drinks. Otherwise, I would have been terrified.

Dude, if you're going to tell a story about being in a Tijuana bar while it was robbed at gunpoint, and shots were fired randomly and almost hitting people, you gotta at least let people know where it happened.

It's was a little hole-in-the-wall dive bar just outside of Zona Norte. I don't even know the name of the place. I'll see what it's called next time I go.