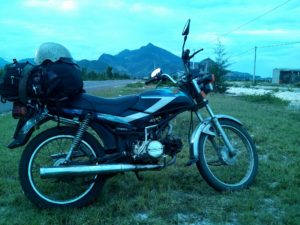 To read my step-by-step guide to making this trip yourself, check out my article: How to Buy and Ride a Motorcycle Through Vietnam

When I first arrived in Vietnam, I didn’t even know buying a motorcycle and riding through the country was an option. At the very least, I thought it would be too expensive. After talking to a few travelers about the journey, my interest was piqued, but I still wasn’t sure. The following night the decision was made for me.

During one heavy night of drinking, I ended up buying my beat up old Honda Win 100 from another backpacker who was desperate to get rid of her. I made a trip to the ATM and took out $150 and bought the bike. The deal was just too good to pass up.

When I woke up the following morning, I was angry at myself for my drunken purchase. In the daylight, I noticed that the bike was pretty trashed, though it was functional. I rode it to a mechanic to get the oil changed, chain tightened, and tires aired up. A couple of days later, I left Ho Chi Minh City completely Il-prepared and clueless. My journey to Hanoi began.

The next week was fairly uneventful. I visited small villages and enjoyed countless bowls of pho. Sometimes, when I saw a deserted beach, I pulled over to relax and enjoy the solitude. I stopped in Nha Trang for a few days and visited the famous theme park, Vinpearl land. 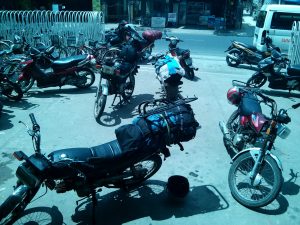 My gang’s bikes outside a hostel in Hoi An

Everything was going great until the day I tried to tackle the Hải Vân Pass between Hoi An and Hue. From the start, everything went wrong. First I got separated with my riding buddies. Next, my front brake started acting up. It just wasn’t gripping like it should. Looking back, I definitely should have stopped at the next mechanic to get them checked out.

As I was descending the pass, disaster struck. It began when I heard the sound of metal dragging on the ground. I quickly glanced down to where the sound was coming from and saw my rear brake line dragging along the pavement. The rear brake was completely gone. Immediately I knew I was in trouble as my front brake barely functional.

I tried my best to control the bike as my speed increased. At this point, I knew I was going to have to lay it down. I approached a curve in the road that I just couldn’t make. As I went down, the bike slid down a ditch and slammed into the guardrail. 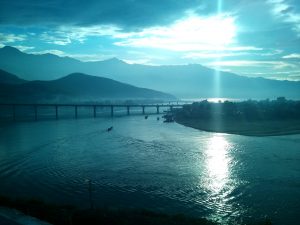 Near where I crashed. This is one of the most spectacular views I’ve ever seen

My first thought after hitting the asphalt was, I hope my bike is okay. I had grown to love the old junker over the past week, after all.

After dusting myself off and checking for broken bones, I made my way over to my poor, busted up bike to assess the damage. The brakes were obviously gone. My clutch and brake levers were broken and the handlebars were slightly bent. I got off easy. Now, I needed to figure out how to fix it. I was in a rural area between towns.

Right as I was struggling to drag my bike out of the ditch and back onto the road, a friendly old guy pulled up. He didn’t speak any English. He pointed to the side of the road about 50 meters from where I had crashed and motioned me over.

I limped my bike over and noticed his small cane sugar stand on the side of the road. Behind it laid a small shack where he and his family lived.

He offered me a seat on a wooden bench and began looking at my bike. He then called to his young son to talk. Soon after, the man took off on his motorcycle and the boy approached me and grabbed my arm.

Most of my right forearm and shin were completely skinned. Blood flowed down onto my foot and hand. After taking a quick look, the boy then ran back to the house. A minute later he returned with iodine and some gauze.

Just then, the man returned with motorcycle parts. He got to work fixing my bike while the boy go to work fixing me. The iodine stung as it washed the gravel out of my wounds. I winced in pain, jokingly and the man and his son laughed.

Within 20 minutes my bike was repaired and I was all bandaged up. I was afraid what all of this would cost because I didn’t have a chance to negotiate before the repair. After a little back and forth we settled on about $20. I thought the price was more than fair for all the work the man did. 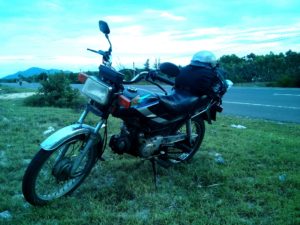 My bike all fixed up and ready to go

A few minutes later I gave my bike a kick and it started right up. Immediately, I realized that my injured leg was my kicking leg. Just my luck. My electric start had died a few days before.

During the rest of the day I had two flat tires and saw the most spectacular view that I have ever seen. All in all, it was a great day of motorcycling. I pulled into Hue at around 10 pm, found a hostel, drank a couple of beers, and went to bed.

When I woke up the next morning I could barely walk. I limped downstairs for breakfast and booked myself a few more days to recover.

I pushed on after the swelling had gone down. Things went pretty smooth the rest of the way to Hanoi. Unfortunately, the bike continued to give me trouble almost daily. During the trip, 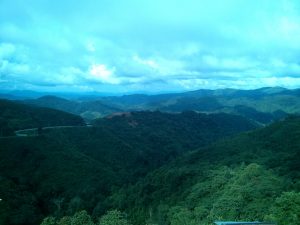 Beautiful ride through the mountains in Northern Vietnam

When I arrived in Hanoi, the bike was pretty much trashed. I immediately listed it for sale but didn’t get any bites. After a few days had passed, I took the bike to a shop and asked what they’d give me for it. The guy offered $130 and I gladly took it. The bike was in much worse shape than when I bought it and I only lost $20 on the whole deal.

It was pretty sad watching someone ride off on my bike but I knew from the start that I couldn’t bring her home with me. This journey was pure adventure and I’d love to do it again.

If you want to make this same trip yourself, check out my step-by-step guide: How to Buy and Ride a Motorcycle Through Vietnam. It includes everything you need to know including tips for buying a bike, route options, accommodation recommendations, safety tips, and much more.