Home » Bikes and Cycling » Panniers Vs Trailer for Bicycle Touring: Pros and Cons

While preparing for a bicycle tour, one of the most important decisions you need to make is how you’re going to haul your gear. Your luggage choice determines how much gear you can carry, how your bike handles, and the type of terrain you can ride. This guide explains all of the pros and cons of using panniers vs a trailer for bicycle touring and bikepacking to help you choose which is best for your style of riding. 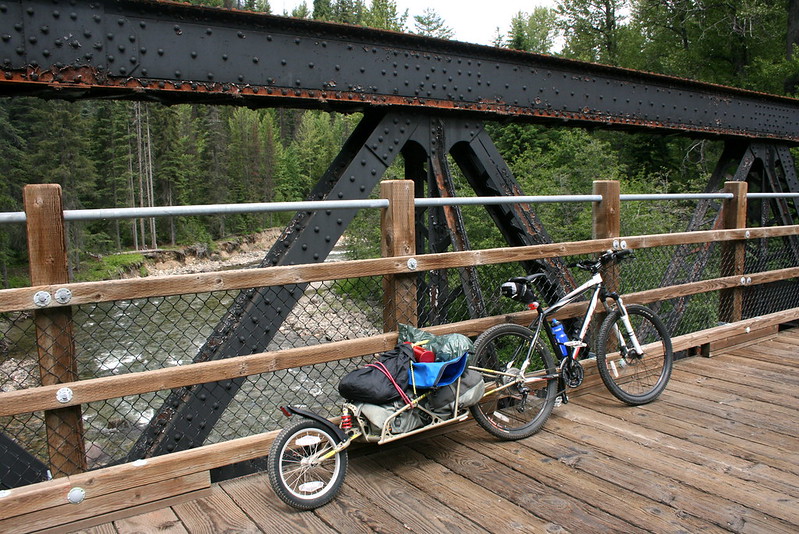 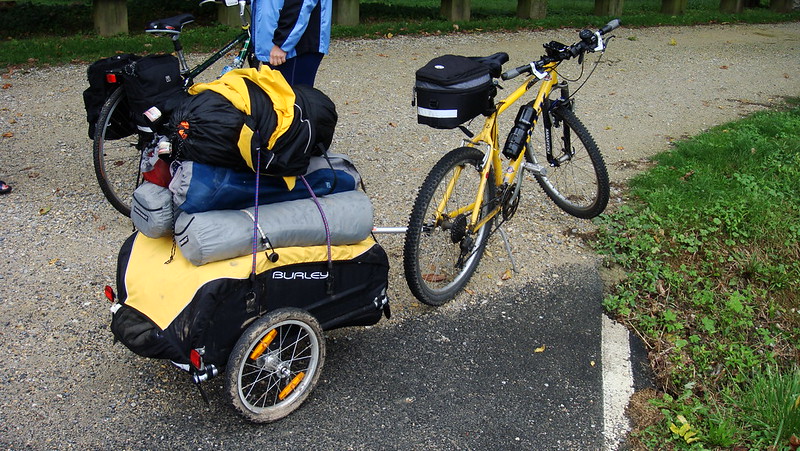 Image: “My Trek 6500 bike and Burley trailer loaded up for three days on the C&O Trail”, by Dion Hinchcliffe, licensed under CC BY-SA 2.0 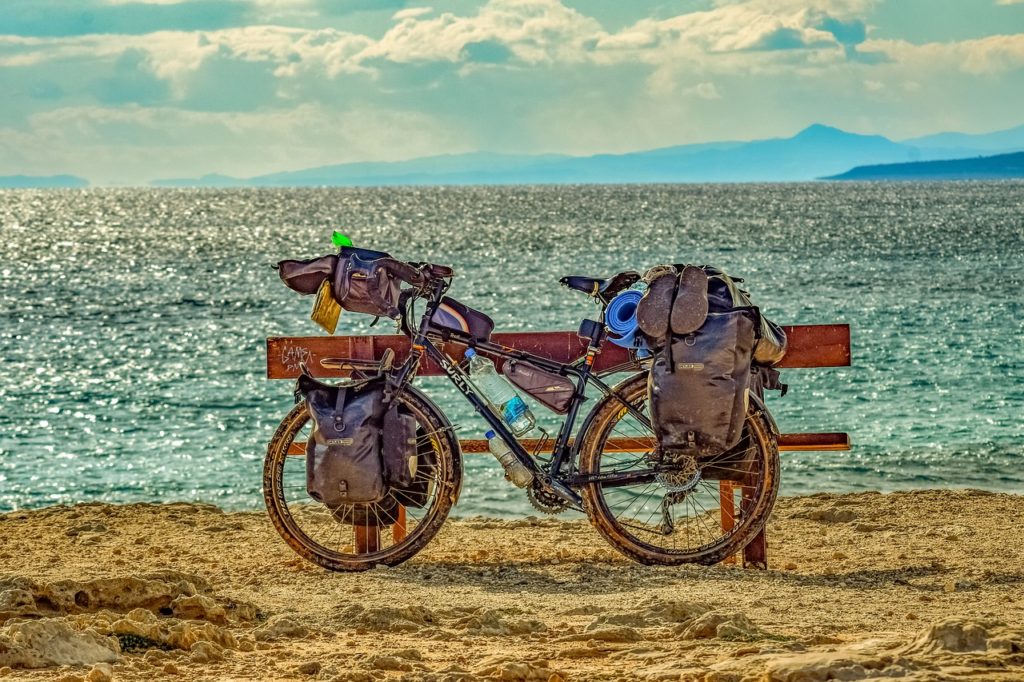 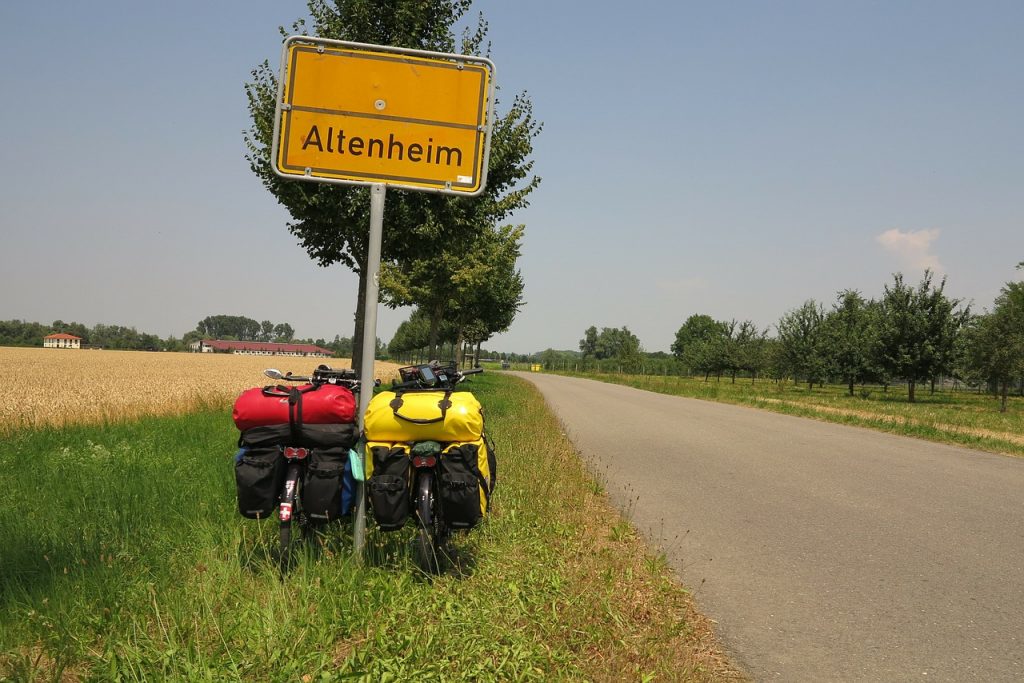 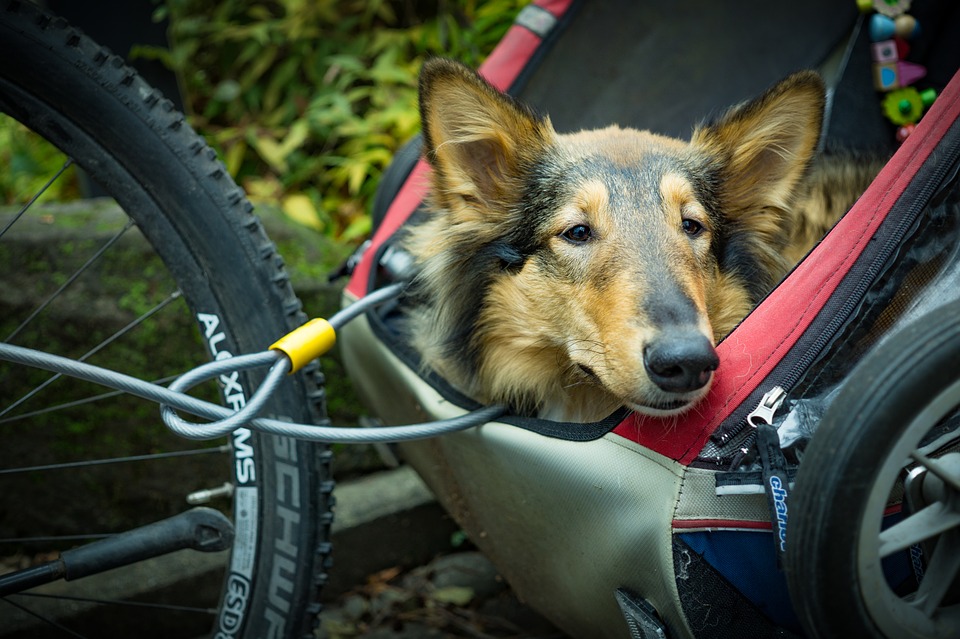 Trailers allow you to bring your best friend with you

Weight and Carrying Capacity of Panniers Vs Trailer

One of the main reasons most bicycle tourists choose panniers over trailers is the weight. Everyone wants to travel as light as possible these days. Panniers and racks are almost always lighter than trailers.

The problem with this comparison is that trailers usually haul a larger volume of gear than panniers. At the same time, Panniers and racks can usually hold more weight. This makes it difficult to directly compare the two.

Volume Capacity of Panniers Vs Trailers

An average set of front and rear panniers and racks accommodates 65 liters of gear and weighs about 4.5 kg (around 10 lbs).

An average cargo trailer that is capable of touring accommodates 75-100 liters of gear and weighs about 6 kg (around 13 lbs).

As you can see, the trailer holds about 25-30 liters more gear and weighs just 1.5 kg (3.3 lbs) more than comparable racks and panniers. If you have more gear or bulkier gear, you might be better off with a trailer.

Weight Capacity of Panniers Vs Trailers

To make the decision even more confusing, you’ll want to consider the maxim load weight. Strong steel front and rear racks can handle loads up to 65 kg (around 143 lbs) combined.

In this case, heavy-duty panniers and racks hold 20 kg (44 lbs) more weight than a comparable trailer. If you have heavier gear or you need to haul a lot of water, you might be better off with racks and panniers.

This is one area where both systems are about equal. Mid to high end cargo trailers that are suitable for long-distance touring usually run somewhere between $300-$500. This includes everything you’ll need to tour including a dry bag, quick release, flag, and the trailer itself. Most Burley and BOB bike trailer models fall into this range.

A mid-range pannier set usually costs somewhere around $350-$500 depending on the brand. This includes front and rear panniers as well as front and rear steel racks that are suitable for long-distance touring. The ever-popular Ortleib panniers and Tubus racks fall into this price range.

Of course, there are cheaper options as well. You can buy low-end trailers or panniers for less than $100. These would work fine for short tours. If you’re on a really tight budget, you could DIY a trailer or makes some bucket panniers for next to nothing.

For some budget tips, check out my guide: How to Put together a Budget Bicycle Touring Setup.

A Note About Efficiency of panniers Vs Trailers

This is one area where I am unsure which system is superior. While researching this article, I read multiple claims that both trailers and panniers were more efficient for various reasons. I was unable to find any solid evidence proving either case.

On one hand, trailers produce more rolling resistance. After all, there is an extra wheel that you need to accelerate and maintain momentum for. It adds friction to your system that you must overcome. This costs you energy. On the other hand, trailers are more aerodynamic. The design is sleeker and produces less drag to slow you down.

Panniers produce less rolling resistance. They increase the weight on your bike wheels but they don’t add another wheel to slow you down. Panniers aren’t as aerodynamically efficient as trailers due to the boxy design. They produce quite a bit of drag.

If you have any evidence one way or the other, comment below. I’d be interested to learn which is the more efficient design. My best guess would be that efficiency-wise, trailers and panniers are about the same. 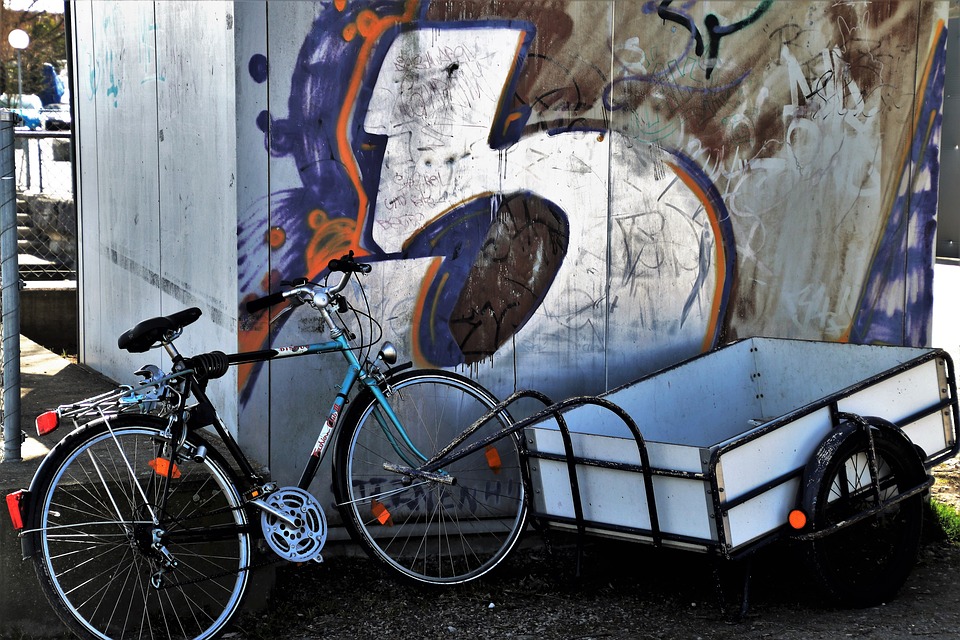 Types of Bike Trailers for Bicycle Touring and Bikepacking

When it comes to choosing a bike trailer, you have a number of designs to choose from. The best trailer for your style of touring depends on the type of terrain you ride, the amount of gear you need to pack, whether you need to pack it for transport, and personal preference.

The two main design choices you’ll have to make when choosing a trailer are one wheel vs two-wheel and axle mount vs seat post mount. You’ll also want to consider the trailer’s size, weight, wheel size, and material.

Axle mount trailers attach to the bike’s rear axle. Generally, single wheel trailers mount to both sides of the axle and only pivot up and down, not side to side. Two-wheel trailers usually mount to the left side of the axle only and pivot left and right and up and down. Axle mount trailers usually include some type of quick-release attachments system so you can easily mount and dismount the trailer.

Generally, axle mount trailers are more stable because they mount and sit closer to the ground. The center of gravity is lower. They also have a flatter cargo area that is easier to load.

The drawback is that they are less maneuverable due to the length. They also put more stress on the bike’s rear axle and wheel. None of the weight sits on the bike’s front wheel.

Seat post mount trailers use some type of clamp mechanism to attach to the seat post. They pivot left and right at the clamp. The clamp usually includes a quick release to allow you to easily mount and dismount the trailer.

These trailers are more maneuverable because they pivot closer to the front of the bike. This reduces the turning radius. They also put a bit less stress on the bike’s frame and wheels because the load weight is distributed toward the center of the bike.

The drawback is that seat post mounted trailers make it harder to avoid obstacles in the road because they pivot side to side. They are also less stable because they mount higher on the bike. If your trailer gets caught up, it can pull the bike around because it has more leverage.

The main drawback to one-wheeled trailers is that they are less stable at low speeds and while stopped. They also don’t stay upright when they’re not attached to the bike. Additionally, they are limited by load height because balance becomes an issue. 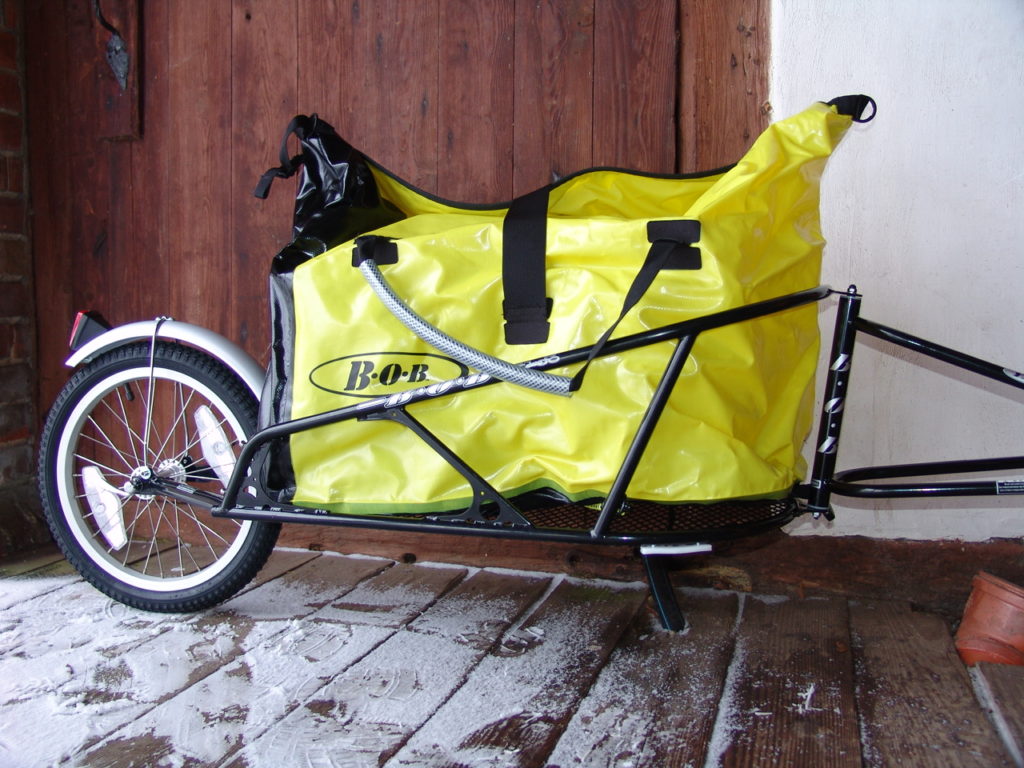 Small wheels in the 12-20 inch range make the trailer more compact and easier to transport and store. The drawback is that small wheels can get hung up on obstacles like potholes and rocks. Small wheels are better for on-road touring.

Large wheels in the 26”-700c range handle rough surfaces much better. The larger circumference allows them to glide over potholes and debris in the road without getting stuck. They are better for off-road touring. The drawback is that large wheels take up more space. This can make transporting your trailer a challenge.

Most bike trailer frames are made of either steel or aluminum.

Steel offers better durability and longevity. The material is also easier to repair if it breaks because pretty much any welder can fix it. For this reason, steel trailers are better for long tours in remote regions or the developing world. The drawbacks are that steel is heavy and it can corrode.

Aluminum trailers are cheaper, lighter, and they don’t corrode. The drawback is that aluminum is more difficult to repair if it breaks. Welding aluminum is a bit more difficult than steel. Not every welder has the equipment or know-how. The material is also a bit less durable.

These same points hold true for steel and aluminum racks as well as bike frames.

A Couple of Trailer Recommendations

A few of the more popular bike trailer options to consider include:

Burley is one of the biggest bike trailer manufacturers. The two-wheeled Nomad trailer weighs under 15 lbs (about 6.5 kilos) and can accommodate loads up to 100 lbs (about 45 kilos). It includes a waterproof cover. The trailer folds down for easy storage.

This single wheel axle mount trailer features a lightweight aluminum frame. It weighs just 4.85 kg (10.69 lbs) and can haul 35 kg or 70 lbs of gear. A dry bag, flag, and fender are included.

This single wheel axle mount trailer weighs 21.5 lbs and can haul up to 70 lbs of luggage. It features suspension, a center kickstand, and an adjustable yoke which allows you to mount the trailer to bikes with hub widths ranging from 126-197 mm. One unique feature is the option to mount panniers to a rear rack which attaches over the rear wheel. This greatly increases storage capacity.

BOB makes some of the most popular bicycle touring trailers. This single wheel rear axle mount trailer is made of strong 4130 Chromoly steel. It weighs 6.1 kgs (13.5 lbs) and can carry up to 32 kgs (70 lbs) of gear. A dry bag is included.

Final Thoughts: Panniers Vs Trailer for Bicycle Touring and Bikepacking

This choice comes down to the bike you ride and how much gear you have to carry. If your bike can handle the weight of racks and panniers and you can fit all of your gear in 4 panniers, then panniers are probably your the best choice.

On the other hand, if you’re bike isn’t designed to accommodate racks and panniers or you’re planning to travel with a massive amount of gear, a trailer is a great option. One of the best benefits of a trailer is that you can ride whatever bike you already have, even if it’s a full-suspension mountain bike, carbon road bike, or folding bike.

To complicate matters even more, you can also consider a bikepacking bag setup. Check out my panniers vs bikepacking bags pros and cons list for more info.

For more info on trailers, check out my guide to the different types of bike cargo trailers.

Where do you stand on the panniers vs trailer debate? Share your experience and tips in the comments below!

More from Where the Road Forks