This past summer, by best friend and I went on our first bicycle tour. After spending months planning the tour, the start date was fast approaching and I still had one problem that I needed to solve. My bike and gear were in Los Angeles and our tour started in Seattle. After a bit of research, I found that Alaska Airlines had recently updated its baggage policy and now will fly bikes for the same price as a regular checked bag: $25. This is an excellent deal for bicycle tourists. It is far cheaper than any other US domestic airline. 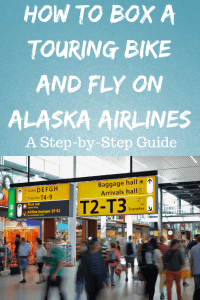 How to Pack a Touring Bike in a Bike Box

I went down to my local bike shop and picked up a bike box for free. To pack my bike:

After Packing the Box

After packing the box, I taped it up and put it on a bathroom scale to make sure that it weighed less than 50 pounds. It did. Everything fragile such as electronics I carried in my backpack along with some extra clothes as carry-on.

This was the first time that I packed a touring bike for air travel. The whole process only took me about an hour. My bike is fairly small. It is just an old Schwinn High Sierra mountain bike from the 80s with 26 inch wheels. If you are packing a large 29er, you’ll want to allow more time to pack and you’ll possibly need a bigger box.

Flying with my Bike from LAX on Alaska Airlines

After arriving at the airport, I dragged my box over to the Alaska Air’s check-in kiosk. I paid my $25 baggage check fee with my credit card and my boarding pass and bag tag printed from the machine. Next, I dragged the bike to the oversized baggage check-in counter. An agent walked over and asked me if I had a bike in my box. I told him that I did. Next, he asked for my bag tag which he stuck to my box and then lifted it onto the baggage belt. He didn’t even weigh the box. That was that. I then proceeded through security and got on my flight.

My buddy picked me up at the airport and helped me carry the box to his car. I unpacked the bike and my gear and checked for damage in the parking structure. Everything had made the trip just fine. Next, I secured my bike to his bike rack on his car and filled the trunk with my camping gear. I folded up as small as I could and fit it into his car. The box was in good enough condition that I was able to reuse it on my way back. 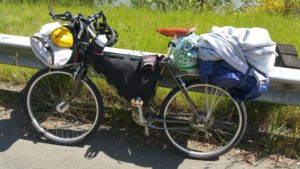 My bike all loaded up

Having lived my whole life between Washington and California, Alaska Airlines was always my go-to for traveling between the two states. I was really happy to see bike friendly they are. I was pretty nervous about flying with my bike. There is always the possibility of damage or additional unexpected charges when flying with a bicycle. I don’t make any money from recommending Alaska Airlines. I’m just writing this to explain the process. Also, I was also really happy with their price and service.

Have you ever flown with your bike? Comment below with your experience and recommendations!

I always put a spacer (wood, pvc pipe, etc) between the dropouts. If something heavy is placed on top of the box your fork won't get crushed. And I tape bunk-old allen wrenches or anything else I need for re-assembly inside of the box. Deflate your tires!

Great tip about taping Allen wrenches in the box!

Roll heavy cardboard into cylinders the right height to help the flat sides of the box not crush into your gear if it is badly handled. Another use for duct tape. I used this on a number of bus rides and was happy I did. You might decide that three of this saves removing each derailleur. Price is right. Worked on an Amtrak trip, too, where box was beat up by some unexpected fast stop; gear was fine. Speaking of Amtrak, strongly recommend Denver to Grand Junction for beauty of views, though of course riding that is better. But, riding up the passes on I-70 is not recommended! Try some maps and see your alternatives.

Good tip about using cardboard rolls. I'll try that next time I box my bike.

I've shipped my bike with Alaska Air a couple of years ago and packed sleeping bag etc.. with it. There were no problems but I could tell that TSA or someone did open it to inspect it. I recently overheard someone else at another airport being told they could not pack items other than the bike in the box even though it was well under 50 pounds. Do your research ahead of time.

Good advice. I had my box crammed full with my bike, sleeping bag, tent, helmet, tools, bags, etc. and was slightly over 50 pounds. Nobody opened it or said anything to me when I flew out of LA. Maybe I just got lucky. It's best to double check the policy before checking in because they can change without any notice. It's a shame that it's such a hassle to fly with a bike.